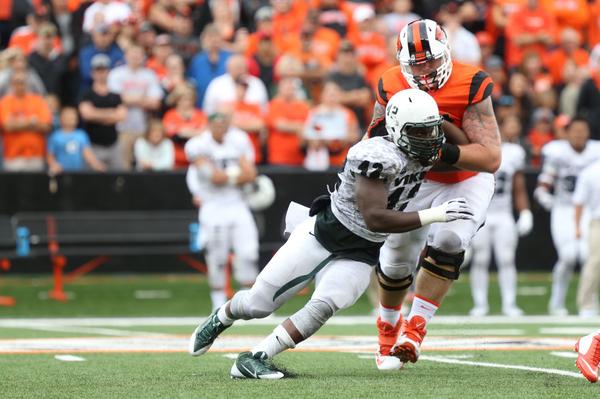 Working with kids at the juvenile detention center. This experience made me realize how fortunate I am and appreciate the people who helped me throughout high school and my family for supporting me

My older brother Trevor MacFadden. He is the most hardworking person I know.

Yes I played soccer growing up.

Yes, I was a running back and outside linebacker in high high school.

I would say my motor and leverage.

When breaking down film I look at the teams run and pass ratio. Then i break down their 3rd down tendencies if its a higher percentage of pass or run. Then last I study their pass protection schemes and their favorite formations to anticipate the next play.

I can’t think of a player but i would say the toughest team I faced every year would be Cal Poly because they run a wing-t offense and that is the most physical game and everyone has to be assignment sound.

I would compare my game to Elvis Dumervil because we have sort of the same frame and size and I like the way he uses he hands for being undersized.

The biggest obstacle in my life I had to overcome would be adjusting to the college life. Being able to balance school and football. I was able to do it thanks to some great leaders on my team such a Deshawn Shead and Drew Hubel.

My program rituals are to read the Quran and look at my Father’s picture who just passed away and ask for his guidance.

The hardest obstacle coming from a small school is exposure. I had to basically market my self by the way I play and by my character

I’m all about that action boss.

Tamba Hali because going to school in New York, majority of my teammates chose to go to Penn State and I watched his biography and it was similar to mine and he is one of the most successful pass rushers in the NFL and his hand usage and pass rush skills are what I try to mimic.

I would buy my Grandfather’s farm for my Mother.