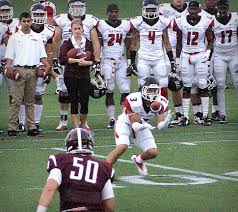 My name is Anthony Abeid.

I come from a neighborhood that is pretty much rundown and almost forsaken in a way. A couple of my teammates and myself went all throughout streets of Youngstown for a day and picked up all of the trash and debris that we could find laying around in the yards and caught in bushes. I felt like we had made a minor impact on the city that day. I would say that one other cool thing that I have done off the field was: going to the elementary school around the corner form the university. We interacted with the kids playing games and reading to them. I remember when I was their age and older athletes would do the same thing, I used to love it.

The hardest college class that I ever had to take was Organic Chemistry.

I am from Youngstown, Ohio.

My role model(s) are my parents. They are the true definition of pure love and determination. They would do absolutely anything for me in a heartbeat. They raised me to be a true man of God and showed me how to love your spouse and children in the purest way. My parents were raised in a state of poverty, and they showed me what determination and faith will bring you in the journey of life.

Growing up I also played baseball, basketball, I boxed for a while, and I ran track.

I played a lot of positions in my career including: Running Back, Strong Safety, Quarterback, Punt Returner, Kick Returner, and surprisingly I was also a Punter.

I believe that I run very precise and strategic routes that are exceptionally hard for the DB’s to cover. I also believe that I am very elusive once I get the ball in my hands. I have remarkable hands and the ability to make that BIG play to spark the team.

When I am breaking down film, the tendencies that I mainly look for are the signs and tells from the DB’s that show what coverage they are going to run for that play. On an individual level, I will consistently watch every DB and analyze their specific strengths and weaknesses and learn how to exploit them.

I would say that the toughest player I faced every day in practice was Lorenzo Jerome. He’s a stud safety who has a great knowledge for the game. Every day our Slot/Safety competitions were a battle.

If there was one player in the NFL that I could compare my play to, it would be Julian Edelman. I will always make the first defender miss, I am not afraid to come across the middle and take the big hit, and I will always find a way to get open during my routes.

When I was 19 (one year out of high school) I received a call from my high school coach Brian Marrow, saying that one of my former teammates, and best friend, had passed away. Anthony Harris and I had a special bond. We always talked about are dreams of playing college ball. He had such a love for life, and he will always be missed. 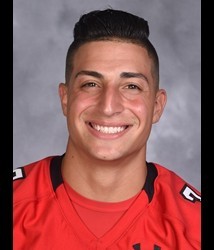 My pre-game rituals are, folding my uniform and all of my gear that I am going to wear during the game, the night before and placing them in my locker; also, I always watch my football highlights the night before. When it’s game day, I blast some 80s and 90s hip hop in my headphones until we go out on the field.

I believe that my biggest strength is my knowledge for the game and how I am able to implement that into my play. I am also extremely versatile.

I am extremely too hard on myself if I mess up or do something incorrectly.

If you were a GM, I would tell you that if you take a chance on me, you would receive a player willing to grind harder than anyone ahead of him. I have faced many obstacles in my life, on and off of the field, which I have pushed through and overcome, while also learning a great deal from these situations. I have a vast love for the game, and I never cease to improve.

My favorite player growing up was Barry Sanders. My favorite team was the Cleveland Browns.

If I could have dinner with three people dead or alive, they would be: Walter Payton, Leonardo Da Vinci, and Bruce Lee.

I wouldn’t necessarily consider this a “big item,” but I would pay off all of my ensuing student debt.