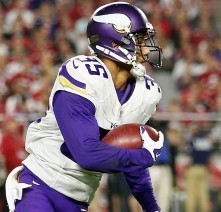 The New York Jets are hosting kick returner Marcus Sherels today according to multiple sources.  Matt Vensel of the Minneapolis Star-Tribune reported Wednesday night that Sherels is set for a visit with the Jets on Thursday.

Sherels made the Vikings practice squad as an undrafted free agent in 2010 and played one game for them late that season. He’s played every game in the last five seasons and while he has seen some time at cornerback, his primary role has been as Minnesota’s punt returner.

Marcus Sherels has played one game at MetLife Stadium. He returned a punt 86 yards for a touchdown Oct. 21, 2013 at the New York Giants.