Marvin Harrison is taking shots at Terrell Owens when I don’t even believe he should have been voted in. Harrison called out Terrell Owens and basically said stop whining in a recent interview. 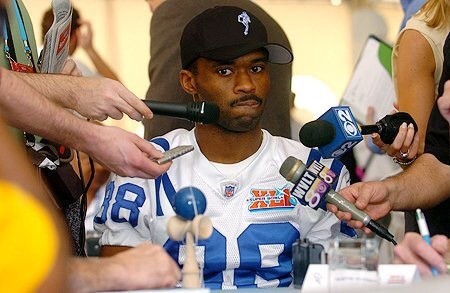 “I wasn’t concerned at all (about splitting votes with Owens),” Harrison said. “I’m not concerned about, you know, T.O. Not one bit. I was concerned about myself. I wasn’t worried about splitting the vote with anyone. That was it. The person who was supposed to get in got in. And that was me. If he didn’t get in, that’s his problem. He can talk all that other bulls— like he’s been doing. That’s on him. But I’m in. My jacket is gold. I will look in the rear view for nobody. So he can get his a– in whenever he gets in … if he gets in. If he doesn’t get in too bad. The hell with him.”

I hope Terrell Owens does not respond because he is five times the receiver that Harrison is. He should be the one in the gold jacket. Remember Harrison was the one that did not go to the Hall of Fame ceremony…… Why? Because he didn’t believe he was going to beat Terrell Owens, that would be my guess.