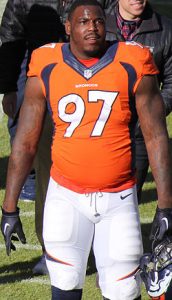 The Oakland Raiders were the first team to agree in principle on a deal with a player, and now the Jaguars are trying to do the same. According to Jason LaCanfora of CBS Sports, the Jaguars are making a very strong push to sign Broncos defensive end Malik Jackson.

Jackson played college football at Tennessee. Jackson was drafted in fifth round (137th overall) by the Denver Broncos in the 2012 NFL Draft.

Continue to hear the Jags making a very strong push for DEN DL Malik Jackson. Deal could be agreed to well before the start of league year