Former #Lions linebacker Travis Lewis has signed with the #Vikings 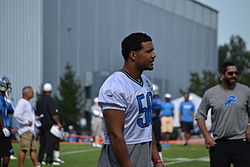 Lewis played college football for the University of Oklahoma. Lewis had a team-high 136 tackles, 12 for loss, and four interceptions, which earned him All-Freshman honors by Sporting News.

Lewis was not considered a big name in Free Agency, but he is a very solid player. He could be a good special teamer as well if needed.