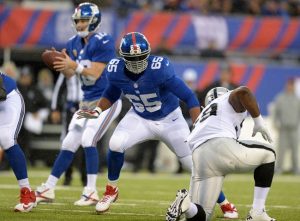 Former Giants OL Will Beatty has interest from a couple teams

Will Beatty was released by the New York Giants a before free agency started, and it was because he was not fully recovered from shoulder surgery. Well he is expected to get the green light from the Doctor’s and he already has interest. According to Tom Rock of Newsday,  teams have expressed interest in him since he was released — the Raiders and Broncos both reached out and asked him to visit for a workout — but he decided to decline those invites until he is fully healed.

“I want to make sure I can perform and show who I really am,” Beatty told Newsday on Tuesday from his home in Arizona. “I don’t want to show them an injured Will. I don’t want to visit a team and say ‘It’ll get better.’ I want to be good and ready to go. I want to say ‘I’m ready and I can be your guy.’ ”

It will be interesting to see who else is interested in Beatty now. Both the Raiders and Broncos have signed players since the original interest in Beatty.