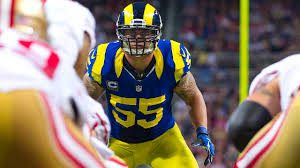 The Atlanta Falcons could definitely use a veteran linebacker on their defense, and according to Adam Schefter of ESPN, they will host one this week.  Schefter is saying that James Laurinaitis is expected to work out with the Falcons this week on Monday and Tuesday.

18 mins ago – View on Twitter
Former Rams’ LB James Laurinaitis, who visited Saints last week, is scheduled to visit Falcons on Monday and Tuesday, per source.

Laurinaitis has already met with the New Orleans Saints but left without a deal. Laurinaitis was drafted by the St. Louis Rams in the second round of the 2009 NFL Draft. He played college football at Ohio State, where he was a three-time consensus All-American and recognized as the top college linebacker. Laurinaitis had 7 straight seasons of 100-plus tackles with Rams.