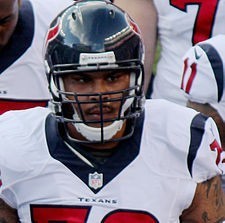 The Houston Texans were hoping to re-sign offensive lineman Brandon Brooks but that will not happen. According to Ian Rapoport of NFL Media Insiders, the Eagles have signed Brooks to a five year deal worth 8 million per season.

Brooks was drafted in the third round (76th overall) by the Houston Texans after not being invited to the NFL Combine. In his first season, he was inactive for the first 10 games before being used as a reserve for the final six games as well as two playoff games.