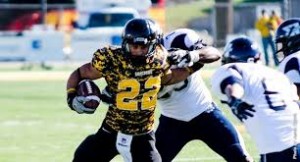 The Dallas Cowboys have released two more players today according to Todd Archer of ESPN Dallas/Fort Worth.  Michael Hill is a former Missouri Western running back that has bounced around the league for a while and offensive tackle Cody Clay was injured last year.

Hill was signed as an undrafted free agent by the San Diego Chargers in 2013.