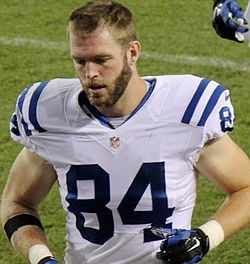 The Indianapolis Colts have decided to keep tight end Jack Doyle.  The team placed an original round tender on Doyle. Doyle was an underrated free agent, so if another team signs Doyle to an offer sheet the Colts would have the first right to sign him. If they fail to do so then the Colts would not receive anything back in exchange for his services.

He played college football at Western Kentucky. Doyle, 6-6 and 267, was claimed off waivers from Tennessee on Sept. 1, 2013. He’s played in 47 games, including seven starts, and caught 35 passes for 209 yards and three touchdowns. He’s also seen action in five playoff games, in which he’s caught seven passes for 30 yards.

Colts gave TE Jack Doyle the low tender for restricted free agent, so no draft pick compensation if he gets offer sheet from another team.