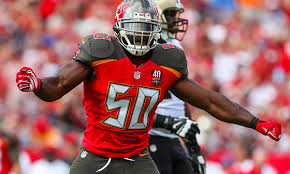 This week will be an interesting one, because many players will be signed and many will be cut. Well tomorrow the Buccaneers are expected to release linebacker Bruce Carter.  According to Rick Stroud, the team is going in a different direction and the move will save them some money in 2016.

Carter lost his job last year to Kwon Alexander and the team is also expected to move on from Danny Lansanah as they did not tender him.  The Buccaneers will be in the market for another linebacker.

#Bucs are expected Monday to release LB Bruce Carter, one of their top FA signings in ’15. Will avoid a $750K roster bonus, $3.5M base sal