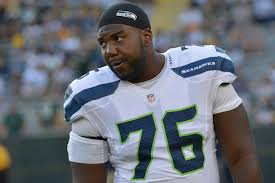 Russell Okung did not receive a dollar in guaranteed money

Russell Okung did not want to do things like the rest of the NFL. He wanted to be his own agent. The 28 year old former first round pick, did not want to pay an agent three percent because he did not think it was worth it, and boy did the NFL take advantage of him for it.

According to multiple reports, Russell Okung landed a 5 year deal worth more than 50 million dollars. That was an amazing deal, until you started hearing about how the deal was worked.

Okung basically signed a two part contract.  Okung’s deal is basically a one year deal worth 5 million dollars, and if the Broncos pick up the option then the rest of his contract would be a 4 year deal worth 12 million a season.  That part sounds good, but the deal is for essentially one year.  This gives the Broncos a year to find his replacement and then to kick him to the curb.

According to Adam Schefter of ESPN, Okung did not receive one dollar in guaranteed money. This is simple folks, you need an agent.