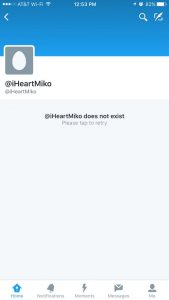 The Tampa Bay Buccaneers just signed cornerback Brent Grimes who many believe was released because of his wife Miko’s antics. Well after his release, Miko went nuts on Dolphins fans and many others. She said some truthful things, but at the end of the day, she was making him look bad.

Today, her Twitter account is gone. It is suspended.  And Brent Grimes was given a new contract.  He was signed to a 2 year deal worth 16.5 million dollars.  Tampa Bay will get to have fun with Miko, but it looks like the rest of the world will not…..