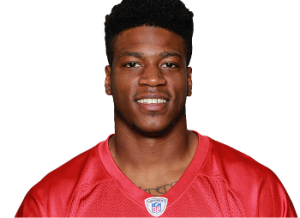 We are learning that the Green Bay Packers will host small school cornerback Michael Lee tomorrow for a workout.  Michael Lee played college football at Fort Valley State University after he transferred there from UMass.  Lee is a physical corner who was signed by the Atlanta Falcons as an undrafted free agent. Lee also spent some time with the Philadelphia Eagles.

Lee recorded 41 tackles (24 solo) with 1.5 tackles for loss, three interceptions, and eight passes defensed during his senior season with the Wildcats. He spent three seasons at the University of Massachusetts, where he tallied 54 tackles, four tackles for loss, two interceptions and 11 passes defensed. Lee is a native of McDonough, Georgia and attended Eagles Landing High School.

Lee is the nephew of former Green Bay Packer Van Jakes. You can learn more about Lee here in our Draft Interview with him.

Lee is a 6’1, 200 pound cornerback that plays physical.  The Green Bay Packers could use a physical cornerback like Lee.  The Packers have some good depth at the cornerback position, but Lee could be a major contributor to their special teams unit as well.