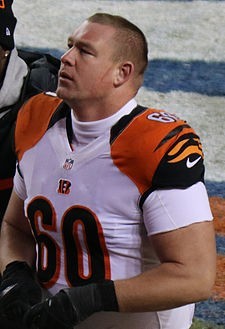 Today the Cincinnati Bengals announced via their twitter account that the team has re-signed offensive lineman T.J. Johnson. Johnson was drafted by the Bengals in the seventh round of the 2013 NFL Draft. He played college football at the University of South Carolina and attended Aynor High School in Aynor, South Carolina.

Johnson has played in 16 games but has never started a game in the NFL.