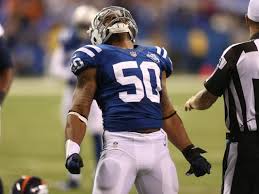 Jerrell Freeman has signed with the Chicago Bears

17 mins ago – View on Twitter
Ex-#Colts LB Jerrell Freeman agrees to terms with the #Bears on a 3-year deal for $12M, source said. $6M guaranteed. $2M more in incentives

Freeman, who turns 30 in May, had 112 tackles in 13 games for Indy last year. Freeman has been first or second in tackles in each of his four seasons with the Colts.

Entering his fifth NFL season, Freeman is shopping around for a long-term deal after the Colts opted not to extend his contract last off-season.

The Bears already solidified one inside linebacker spot, signing Danny Trevathan to a four-year, $24.4 million contract on the opening day of free agency.