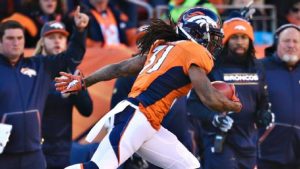 According to Troy Renck, the Chicago Bears are hosting another former Denver Bronco today. Omar Bolden the cornerback/returner is hoping to land a deal with the Bears today.

Bolden played college football for Arizona State University, where he was considered one of the top cornerback prospects of his class. Despite sitting out the 2011 season with a torn ACL, Bolden was drafted in the fourth round of the 2012 NFL Draft by the Broncos.