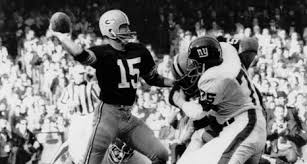 Hopefully we have seen the end of hazings at colleges and universities around the world, but let’s face it, we all knew it happened.  This story by AL.com turned out to be pretty telling, after Cherry Starr, the wife of Packers legend Bart Starr spoke about a hazing/beating that her husband went through to land in the varsity athletics A-Club.

According to his wife the initiation to get into the university’s A-Club, was not easy. A group to unite the school’s varsity athletes, meant you had to suffer a wooden paddle beating.

“He was hospitalized at one point in traction,” Cherry Starr told Al.com. “That was in the days when they were initiated into the A-Club, and they had severe beatings and paddling. From all the members of the A-Club, they lined up with a big paddle with holes drilled in it, and it actually injured his back.”

Bart Starr, now 82, and one of the greatest players the NFL has ever witnessed. He won five championships with Vince Lombardi as his coach. But according to Cherry, his back bothered him his entire career.

“His back was never right after that,” Cherry Starr said about the 1954 incident. “It was horrible. It was not a football injury. It was an injury sustained from hazing. His whole back all the way up to his rib cage looked like a piece of raw meat. The bruising went all the way up his back. It was red and black and awful looking. It was so brutal.”

I highly doubt that Alabama still has these types of beatings, but if they do I hope they stop.  No one deserves that type of punishment.