2016 NFL Draft: The Best Safety You Haven’t Heard Of 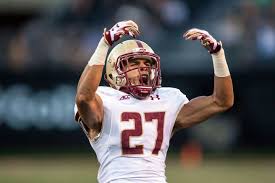 From the safety position, we hear names emerging like Jeremy Cash, Darian Thompson, and Karl Joseph as some of the top defensive backs in this upcoming draft. While those individuals perform at a top caliber of play, I would espouse that Boston College’s Justin Simmons deserves more recognition. The tapes that will be used to complete the breakdown are games against Notre Dame, Florida State and Clemson.

Notre Dame was Simmons’ best game. He was instinctive, quick, and ferocious. Plays like this vividly display what the definition of hustle is. Simmons perfectly calculates the ball’s trajectory and breaks his zone to make the interception. While this was an absolutely atrocious decision by the quarterback, I believe there should be a fair amount of credit given to Simmons for this wildly athletic play.

This is yet another stellar play that Simmons made in the red zone. These are the traits you look for in secondaries that are playmakers. You have to love his range here and how well he extends for the ball. That type of heads up play will permit him to see some field time.

Clemson
:35-:45 Watson stares down his receiver. Simmons jumps in for pick.

Boston College will miss Simmons as their reliable cover 1 safety because of plays like this. Watson stares down his receiver and Simmons followed his eyes the whole time. Simmons is a ball hawk and has made 5 interceptions this year.

I’m not sure if there is a better tackling safety in this draft. Simmons excels at making contact with the ball carriers and causing impactful hit. In addition, he is honed in on getting the ball loose. Simmons will translate well into the NFL because of his consistent ability to wrap up anyone who has the ball.

Simmons has been one of the most valuable assets to the Boston College defense over the past few seasons and the film explains why that is. He is clearly a reliable, up-tempo player who can be counted on to cover his zone. While his man coverage could use some improvements, he is an unsung defensive hero.