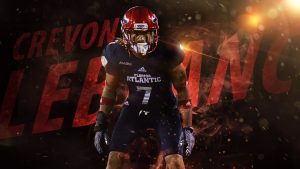 Cre’von Leblanc is a stud, make sure you watch these clips

During this draft, teams will reap in a bountiful harvest of stellar defensive players. One of which is falling through the cracks and is appearing in mock drafts towards the 7th round. Cre’von Leblanc is arguably one of the most versatile, and intriguing, defensive backs in this draft class. Here is a breakdown some notable observations found in his films against the University of Miami (FL) and the University of Florida.

Leblanc isn’t the fastest man on the field, but his tenacity and aggressive style of play compensates for this. Observe how he strategically positions himself against the receiver. Leblanc jammed his left arm inside the receiver, which denied the Gators’ touchdown. That type of elite playmaking ability Cre’von possesses is something scarce to find amongst 7th rounders.

Even if a team is roster-heavy on corners, an asset like Leblanc would be an invaluable asset because there is potential for him to be converted to a run-support safety. In heavy-set offenses, Leblanc will stack the box and imitates what would be a WILL or strong safety. The reasoning behind aligning him there is because Cre’von is a brute and tackles harder than most corners you’ll find. Perhaps with a little more weight, Leblanc could turn himself into D.J. Swearinger-like safety.

If there were any red flags that stood out while watching Leblanc’s tape, it was typically about his length. He doesn’t have a great vertical and he wasn’t endowed with the length to offset that. He’ll have to rely on his outstanding playmaking ability and unmerciful tackling in order to make an impact.

For Leblanc to make a roster, he will have to excel in special teams. FAU used him as a return man during kickoffs, but he would nicely fit in as a gunner. Leblanc has displayed a superb ability to accelerate and decelerate, which is absolutely key for anyone at that position. He has also displayed that he has a knack for getting to the football, so there isn’t much of a question or concern in regards to his ability to finish the play. Based on what he has done on tape, it seems that Cre’von Leblanc will be a great asset for any team wise enough to draft him.