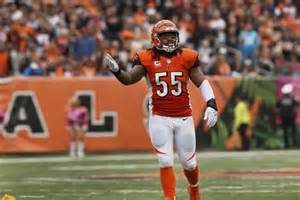 Antonio Brown was pissed after finding out that Adam Jones went on the Dan Patrick Show to say he was faking an injury after getting hit by Vontaze Burfict. Brown was upset and man did he let them both have it. He called Vontaze Burfict an idiot and had some choice words for PacMan Jones.

“I was a little upset about it all, but nothing surprised me,” he said. “I know the position I’m in. Guys are going to try and take me out, but I got to be able to overcome it all and not let those type of things affect me.”

Jones tried to apologize for his comments after Brown missed the Divisional Round, but the receiver had no interest in talking to the corner.

“Not at all, I think he texted me, but I was really upset,” Brown said when asked if he talked to Jones. “A guy goes on national TV and says I’m an actor towards anything that regards the game. I’m a true professional. I don’t play no acting games and I take pride in my work and being a professional.”

On Thursday, Brown was asked on the Dan Patrick Show what he would say about Burfict. “He’s an idiot,” he replied. “In that situation Burflict and Pacman Jones cost them the game, from the hit to the personal foul, allowed us to make the field goal and advance to the next round.”