Report: Mohamed Sanu is likely to move on from the Bengals 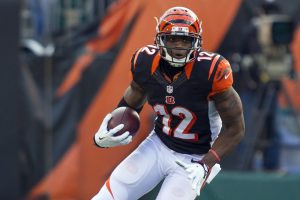 Mohamed Sanu is likely done in Cincy. The Bengals may be in the market for another wide out

Our friend and follower Alex Marvez of FoxSports.com was on Sirius XM radio and according to Marvez, Bengals wide out Mohamed Sanu will not re-sign with his team.

According to Pro Football Talk, Via Alex Marvez of FOXSports.com, there is “virtually no chance” receiver Mohamed Sanu will re-sign in Cincinnati. Marvez reports that the Browns, Falcons, and Giants “are among the teams expected to express interest” in Sanu, which is a roundabout way of saying that those three teams already have reached out to Sanu’s agent three-plus weeks before the two-day legal tampering window opens. Which is the kind of thing that’s rampantly occurring this time of year.

Sanu did not have a great year, but his performances helped seal several wins for the Bengals.