Report: Miami Dolphins would like to keep Rishard Matthews after all 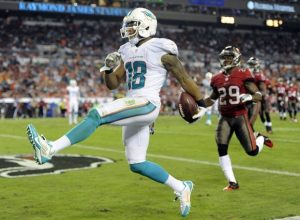 Dolphins would like to keep Rishard Matthews after all. The only problem is will the Dolphins win the race to keep him?

For the past several years, Rishard Matthews the Miami Dolphins wide out has been trying to get out of town. He demanded a trade a couple years in a row, and now the former Nevada star is being approached by the Dolphins to stay.

Many viewed Matthews as the odd-man-out of the Dolphins’ plans at wide receiver, but according to the Miami Herald, there’s still a chance that Matthews re-signs with the team that drafted him in 2012.

In a bit of a stunner, the Dolphins have contacted Matthews, a pending free agent, about a new deal that would keep him in town, the Miami Herald has learned.

Someone is going to pay Matthews who has emerged as the number 2 wide out in Miami, but will he trust the organization that played him for the past couple years when he truly wanted out of?