Report: Ex-49ers DL Justin Smith would like return to football, just not for the 49ers 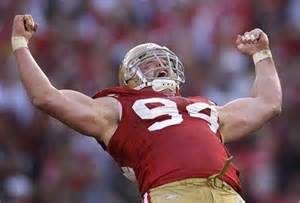 Justin Smith would like to return to the NFL, the only problem is he wants to go to a different team

Yesterday, Mike Florio of Pro Football Talk reported that veteran defensive lineman Justin Smith would like to return to the NFL. The 37 year old pass rusher feels he still has something left in the talk, and would like to return to play next season, but there is a problem with that. He does not want to play for the 49ers, who own his rights.

A league source shared with PFT at the Scouting Combine the intriguing rumor of talk that Smith would like to play again, but that he doesn’t want to play for the 49ers.

If Smith was to return he would still be under contract with the 49ers.  So the 49ers would own his rights, which means they could trade him or release him.  Smith is not getting any younger, and it may be hard to find a suitor for a 37 year old who sat out of football all last season.