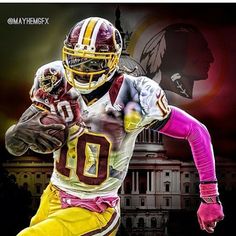 RG3 is a solid player, but he has played his last snap as a Washington Redskin

Last week, team president Bruce Allen said, “We’ve heard from some teams that are interested.” Then a few days later ESPN reported that a couple teams were interested in the former Heisman Trophy Winner.  Well now Pro Football Talk is reporting that the Redskins would trade Griffin for anything at this point.

As PFT has reported, Griffin would consider it for the right team, because if said “right team” is willing to give something up to get Griffin, it shows that the interest is genuine.

If I was a team like the Buffalo Bills who have Tyrod Taylor, I would definitely trade for RG3.  Why not, it makes a ton of sense and it gives you a better back-up option than the E.J. Manuel.