Raiders and Texans will play in Mexico this year; 4 games now outside the US 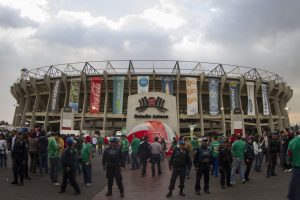 Mexico will have American football again this year

The NFL is becoming international now, and Roger Goodell announced today that the Raiders and Texans will play in Mexico. It will be the first time a game has been played in Mexico since 2005.

Texans and Raiders are expected to play a game at Azteca Stadium during the 2016 regular season. Goodell said that the two teams will play on Monday, November 21 in Mexico’s capital with the Raiders serving as the “home” team. The last game played in the stadium drew over 100,000 fans.

“Expanding our International Series of regular-season games to Mexico marks an important step in our continued international growth,” Goodell said in a release from the league sent out shortly after the announcement.  “We have a tremendous, passionate fan base in Mexico and we know the atmosphere on game day will be outstanding.”