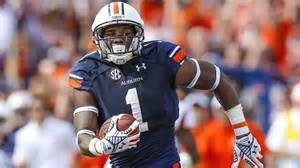 D’haquille Williams should be drafted, I do not care what NFL scouts feel. I feel he can play

When I watch D’haquille Williams a lot jumps off the film, including his frame. The 6’2, 225 pound wide out is a big, physical wide out that may not be the fastest wide out in the draft but he can catch. There are rumors now that he could end up going undrafted.

Well I am writing this to inform you, if you plan on letting this kid go undrafted you are making a mistake. Many of you will say, who are you, but let me take you back to a player I thought would be a steal in the draft and was overlooked because of a bad image of character concerns.

His name was Vontaze Burfict.  We pounded the table for the former Arizona State linebacker and he is now a Pro Bowler. In his career he has 401 tackles, 5 sacks and 2 forced fumbles. While people will look at him as a dummy because of a late hit on Antonio Brown last season, you need to look at the drive before that, to truly evaluate him. Burfict made a diving interception to really put the Steelers away.  The Bengals dropped the ball (Literally) when Jeremy Hill fumbled, and the rest is history. The kid is passionate, and he plays the game at an extremely high level. His teammates love him and at the end of the day, when that helmet goes on he is a competitor.

Williams is the same way. As a Junior, Williams led the Tigers with 45 catches for 730 yards and five touchdowns last season in just 10 games, also led Auburn in targets, averaging 7.2 per game. He did miss the Outback Bowl for missing practice and was suspended. He was also suspended this year for a bar fight in Auburn.  While he was dismissed off the team, one thing is being forgotten.  This kid before the season started was every draft evaluator’s number one receiver in 2016.

Williams, was projected as second-round pick in last year’s NFL Draft but did not submit his paperwork for evaluation by the NFL Draft Advisory Board, because he wanted to come back to Auburn and make things right.

Let’s look at Mel Kiper’s comments on Williams before the incident this year:

“When you look at Duke Williams, he’ll be the No. 1 guy,” Kiper said. “Next year, he’ll go into the season right there at the top.”

Obviously, I am not the only one who feels the kid can play football. If this kid slips past the 2nd round, whoever draft him will get a steal. Some players can actually turn their lives around. Ask Marcus Peters, Tyrann Mathieu and that guy I mentioned above.  All three have turned into pretty solid players. Do you agree?

I cannot say what happened that night at the bar, where he punched several people, but we have all made mistakes in our life.  I am not saying someone should draft this kid in the first round, but if you are a scout and let this kid go undrafted you should lose your job.  Especially if you are an area scout in his area. Character is a concern in the NFL, but remember there are players that can turn their lives around.