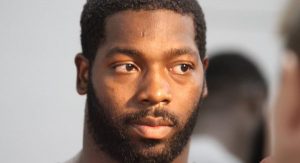 Ohio State NFL Draft prospect Adolphus Washington was suspended his final college game of the year for solicitation and now that charge has been dismissed.

According to Pro Football Talk, Washington plead guilty to the charge under an agreement it would be dismissed if he completed a program known as “John school” before his sentencing.

Here is the definition of John School:

John school is a form of educational intervention aimed at clients of prostitutes, who are informally known as ‘Johns’ in North America. John schools are usually a diversion program for people – almost exclusively men – arrested for soliciting the services of a prostitute, or another related offense. This often acts as an alternative to criminal prosecutions. However, in some jurisdictions, courts may sentence men to attend a john school program as a condition of probation.

Whether the John school is a diversion program or a sentencing condition, the client will often pay a fee to enroll. The fee frequently covers the cost of the program and sometimes contributes to programs to aid prostitutes, or community projects within red light districts. John schools often last for one day. Their focus is often on the experiences and harms of prostitution, such as the violence associated with prostitution, the sexually transmitted disease risks of prostitution, and the effects of prostitution on families and communities