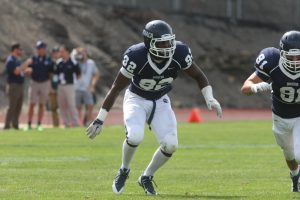 Every year we do a number of things to give back to the community. Yet, one of the my favorite things was our Ithaca College Football Give Back Day where we got to run drills with the youth football teams in the community. It was great experience to be able to interact and help out a lot of of our younger fans.

I am from Long Island, New York.

My parents. They have worked so hard to get to the position they are in they are in now, after starting a new life here in the U.S.

I did martial arts. I played baseball, soccer, volleyball, track and lacrosse.

I played tight-end and defensive-end in high school. I played defensive end in college all the way up until I got switched to linebacker my senior season.

A combination of things. I believe my pursuit and pass-rush are only some of my strengths. Combine that with my ability to learn things pretty quickly, and you end up with a pretty versatile player.

Tendencies and little keys in the opponent that hints to what they are trying to do.

Von Miller. He’s a disruptive force that is constantly in the backfield.

I injured myself pretty badly the off-season of my sophomore year in college, and was recommended not to play football anymore by some medical professionals. My off season consisted of me doing rehab every day of the week. I was able to recover, and ended up leading the team in sacks the following season.

I would usually do a lot of visualization to get myself in the zone.

My work ethic for sure. There were times that the odds were certainly against me, but through hard work and effort I was able to reach the goals that I strived for.

Last season was my first season playing linebacker. I’m not as experienced at the position as I would like to be. Yet, that is the reason why I believe I have so much potential at the position.

I will take on whatever responsibility you want. Whether the role is being a starter, being on the practice squad, or being on special teams. I will work to be the best at whatever position for the team.

The Giants and Justin Tuck.

Pay off those student loans.