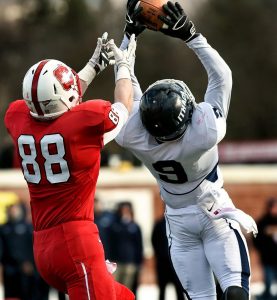 Malik Morris is a big player with amazing ball skills

Ithaca Football give back day. Local Pop-Warner teams come to our field and we spend the day playing football, doing drills, and working on touchdown celebrations with the kids.

My mother. Everyone that knows her understands. She is the most selfless person i know, and my character is a direct result of her great job raising me as a kid.

Running back, Safety, Linebacker, Kick Return. I tried to play both ways in college but my coach was not having it.

It would probably be my ability to come up in the box and make tackles. Most defensive backs don’t like to hit but i consider myself a well rounded player, and can fill the box with the big guys.

Split tendencies from receivers, where they are lined up in space. Also the speed of release off the ball to indicate some routes.

Joe Ingrao. He was slow but this guy caught EVERYTHING.

Eric Reid, he’s one of the most underrated players in the game and his presence is felt no matter who the 49ers play. He’s fast, physical and just a great overall person.

When I graduated elementary school, my mom wanted me to have the best options possible so i went to a private school that was a 2 hour commute there and 2 hours back everyday. It sucked for the time being but it was definitely something that set me up for all of the success that i have had in my life. 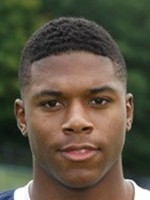 Sitting on the field hours before the game, just soaking up the pre game hype.

Physicality. I love playing bump and run coverage. Hopefully i can put the receivers in the sidelines.

Being too confident in my own abilities.

I have a versatile set of skills, so I can play wherever you want to plug me in. Most players dread playing on special teams, those are the opportunities that I strive for. One key block/tackle can change the course of any game. Last but not least, I am a low maintenance player. You know what you are going to get from me on and off the field, and that’s excellence and leadership.

Tyrann Mathieu, LSU days. The honey badger don’t care. Buffalo Bills would have to be my favorite NFL team.

Call up the people from house hunters paradise and tell them that my mom is ready for her own episode after years of watching.