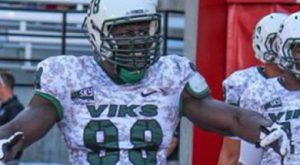 Dame Ndiaye is a big boy that is a physical specimen. He can play both tight end and defensive end. NFL teams will love his upside

Go to children’s hospitals and meet the kids. I like to read to them and put a smile on there faces .

Big brother Elhadji Ndiaye , always been by my side.  He has always been happy with anything I did in life and always gives me great advice by leading by example.

Yes soccer and then basketball my first real love

At tight end its my speed with one on one coverage and my tenacity as a blocker I have a defensive mindset as a blocker to punish a defender . At defensive end its my motor and my ability to chase down plays from backside in a such quickness and my pass rush skills.  My hands are good and I have good athletic ability from spins moves to counters to different variation simply my first step get off

When breaking down film as a player I look for my opponents style , habits and what they like to do. I don’t focus too much much on them because it takes me away from my Instincts rather then Just thinking and assuming that’s what they going to do when they play me. I just like to know what they do . At tight end When I’m watching myself I look at my weaknesses and what I could have done better as a player, especially Blocking and running routes. As a defensive end I look for at the offensive linemen’s stance, and ask is it a run/pass? I look at other keys and see how they correlate and then let Instincts take over over by reading the keys during game time.

As a defensive end it would probably be more then one, as in Demarcus Ware ,Von Miller , Robert Mathis and as a tight end I would say two guys Vernon Davis ,Will Tye 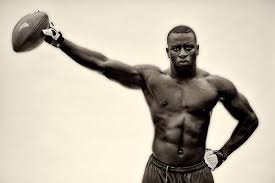 Being homeless growing up in New York with my family and going to different homeless shelters in different boroughs and living in homes where you had to sign in and out to be kept tracked off. I overcome them by staying positive and not letting it affect us my dad did a great job of making me my sister and brother do that .

It would be a pleasure and privilege to play for the their franchise, would get a humble hard working kid with a really big chip on his shoulder to prove people wrong.

Dave Chappelle , my Grandma , My Dad