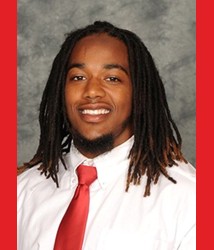 Collaborated with local church in Brownsville Pa and a few other teammates for a annual Family Day where we played football basketball baseball and even kick ball with youth member of the church and community signed different items for the members of the church took lots of photos with the babies and church family also  had a chance to speak to the youth after we had dinner with the entire church family.

Cleveland, Ohio but I graduated from Hamilton High School in Hamilton,Ohio

Looking back on all the years I played football I have played every positions besides center and guard defensive tackle and Defensive End. I love football so any opportunity I had to play I took it and was proud to play it growing up ha I won best offensive lineman awards my coaches growing up stressed the importance of versatility.

I believe that my natural instincts for the game my hand physicality, tireless effort, my ball skills DB’s are stereotyped as having bad hands I train my hands as much I train anything. my passion for the game, as well as my drive to always want to get better I am my own biggest critic I am never okay with my efforts I want to always strive for perfection.

In College I had a chance to play with some great players but the toughest opponent I ever faced was Nigel Barksdale QB Slippery Rock University. But the player I ever faced throughout my entire football career would be Spencer Ware RB Kansas City Chief.

If I could compare myself to any in the NFL Currently I would say Tyrann Mathieu. I would compare myself to Tyrann because I am capable of player all defensive back positions I’m am physical playing the run I have ball skills I am very passionate when I play and I versatile in the special teams game.

The biggest obstacle I believe I have had to overcome in life would be losing multiple Division 1 Scholarships because I didn’t test high enough on ACT test. I overcame this obstacle by believing that God has a major purpose for my life and that as long as had faith I could make it through that rough patch in my life. I was contacted by David Cole and John Luckhardt who came and offered me a scholarship to pursue my education and play football at CalU I was blessed to play with great players that allowed me to fill at home such as Jeff Knox Jr, Rontez Miles, Erik Harris, Eric Kush, and Dewey McDonald they all showed me that all my dreams were possible at CalU. I believe living up to the great tradition at CalU  and my desire to be the first in my family to graduate college all played major parts in getting me through my hard times.

I took something’s from greats such as Deion Sanders and lay out my entire game day entire on the locker room floor in front of my locker from jersey gloves socks to cleats and wrist bands and I always listen to half slow jams and a playlist I called “Feeding Time” it’s a mixture of my favorites songs from Trey Songz to Migos, Drake, and Future.

I believe that my biggest weakness is coming from a small school and not being a 4 year starter.

I would say that by investing into Chaz Veal you will receiver a team oriented coachable player with and endless motor that brings intensity and passion also that can be an ambassador for your organization that is willing to do whatever it takes to fulfill organization and team goals and an opportunity to play for this great organization would be an blessing and honor.

My Favorite player was Always and forever being Deion Sanders and my two oldest brothers they set the standard and made a way for me to have the opportunity to play as long as have and possibly longer. My favorite Teams growing up were the Carolina Panthers and Cleveland Browns because being from Cleveland I liked the Browns but  the panthers were the team nobody really liked and I like the passion Steve Smith Sr played with and I love their uniforms too.

I would choose Jesus ,My Uncle Lucius who passed away and Barack Obama these the people showed and told that the sky is the limit and that greatness is and expectation not a choice.

My Mom a building where she can continue to own her Business Redirection Driving School and have the opportunity to decorate anyway she pleases because she love HGTV and she would have a ball making that building how she pictured when she started the business.