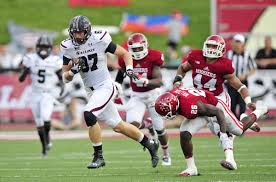 Southern Illinois has a big target in Adam Fuehne, this kid has soft hands and can play

A couple of guys on the team went to a nearby town that was affected badly by a tornado in 2012 to help clean up the debris. It was an eye opening experience to see the devastation caused by the tornado. Though our work hardly did a dent in what was a long clean up it felt good helping those who needed it.

Business Law. There was a lot of terminology and laws that I really had no idea what they meant.

My parents. They have successfully started three different businesses, a farm, a logging business, and a sports bar. They taught me that you get nowhere in life without hard work and you have to earn everything that is given to you.

I played baseball and basketball

i played QB/RB in grade school. In high school played mostly WR and a little bit of DE

My size and overall football knowledge I feel separates me from others in my position. I can make in game adjustments very easily and rarely make the same mistake twice.

When breaking down film first I look at the defensive lineman and linebackers I will most likely be blocking. I look at what tendencies they have and try to gauge what type of player they are. Next I look at the secondary and find what coverages we will see in certain situations. 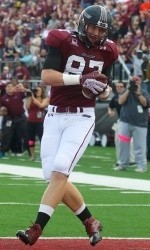 Lance Kendricks. He is a true all around tight end he blocks well and can also run good routes and catch the ball. He is utilized well in the red zone also.

My biggest weakness is probably my speed

I am a hard working blue collar guy who is willing to do whatever it takes to win the game. I don’t care about individual stats the only important thing is winning.

My favorite team was the St. Louis Rams especially in the early 2000’s when they had the “greatest show on turf” with Torry Holt, Issac Bruce, and Marshall Faulk

A house back home