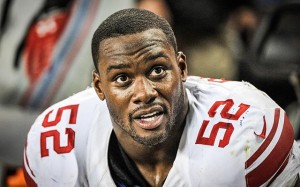 They released left tackle Will Beatty and guard Geoff Schwartz on Wednesday, which combined with the retirement of linebacker Jon Beason, creates an additional roughly $12 million of 2016 salary cap space.

“I always tried to give my all and be competitive,” Beason told Giants.com. “I wanted to go out and continue to play at a high level, giving my all. I was able to do that.”

The Giants have plenty of holes moving forward, so they will need this upcoming draft.