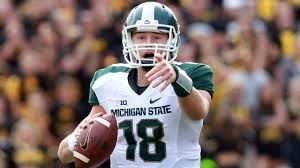 Connor Cook is a gunslinger for Michigan State and when he was asked about who he compared himself to his answer was another former Michigan quarterback.

“I think I’d have to say Tom Brady,” Cook said about the quarterback who is considered one of the greatest leaders in NFL history. “Obviously he has great stats, and he throws for a lot of yards and a lot of touchdowns, but I think my game (compares) to his because he’s a winner. I go out there and try to put my team in the best situation to win each and every week, just like him. There (have) been times where … he’s made a mistake and put it behind him, goes out there, throws a touchdown and leads his team to victory. In that way, I’d say my game kind of reflects Tom Brady’s, the competiveness, love for the game and his will and drive to win.”

Cook says he was asked about his leadership as well, but he had no problem answer those questions.

“Some teams went right to the captain deal and asked that,” he said. “And some teams said, ‘Hey, we know you’ve been asked that question a thousand times and we just want to talk football. Just jump straight to it, and jump on the (play-diagramming) board.’ It’s a great question; a lot of people want to know why and I understand.”