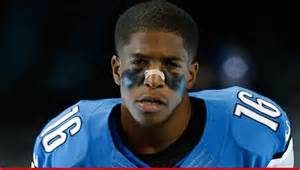 Titus Young could be locked up for his recently incident

Titus Young is a perfect example of a talented football player that needs help. According to TMZ Sports, the former Lions wide receiver from Boise State was arrested again.

The former second-round pick in 2011 was arrested in Los Angeles for assault with a deadly weapon after allegedly beating up a man in a street fight.

Young was later charged with felony battery with serious bodily injury following the Jan. 30 incident,TMZ Sports says, and could face up to four years in prison if convicted (and an additional five years due to his prior arrests).

We have recently seen a problem with players like Johnny Manziel, Ray McDonald, Josh Gordon and Aaron Hernandez, but it sounds like Young will end up in prison like former Rams first round pick Lawrence Phillips.  Let’s just hope he gets the help needed and his life does not end like Phillips.