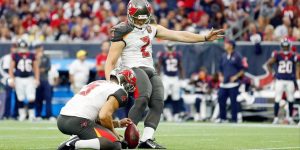 Kyle Brindza has been released by the New York Jets

The Jets have waived kicker Kyle Brindza two weeks after signing him to a reserve/future contract, as a result of Brindza tearing his Achilles’ tendon during a workout.

Brindza (6’1″, 236) entered the NFL as an undrafted free agent out of Notre Dame with Detroit after last year’s draft. The Lions traded him to Tampa Bay for TE Tim Wright in August and the Buccaneers waived him in October.

Brindza was a kickoff specialist as a Notre Dame freshmen, then was 70.4% field goal kicker (57-of-81) and scored 93-plus points in the last three of his four seasons with the Fighting Irish.