Jerry Rice says it is a shame if Calvin Johnson retires; Says he just hit his prime at 32 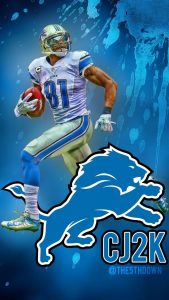 Is Calvin Johnson a first ballot Hall of Famer?

Jerry Rice maybe one of the best wide outs to ever suit up, and now he is reflecting back at his journey.  With Calvin Johnson announcing he is planning on walking away from football, Rice made a comment when interviewed by MLive.com and said he was just starting to hit his prime at the age of 32.

“It’s just unfortunate to see him (walk away) because he’s around, like, 32,” Jerry Rice told MLive.com Wednesday. “I was just coming into my prime at his age.”

In nine seasons, Johnson compiled 731 catches for 11,619 yards and 83 touchdowns. Rice went on to say that Johnson should be a first ballot Hall of Famer. Do you agree?

“He’ll be a first-ballot (Hall of Fame) guy,” Lott told the Detroit Free Press. “In those nine seasons he’s allowed all of us to know that he can be just as good as Jerry Rice. And that’s key.”