Is RG3 in play for the Dallas Cowboys with Romo’s surgery? 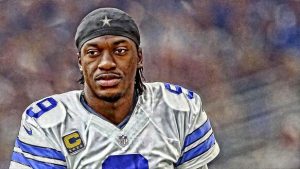 Robert Griffin III is from Texas and would likely love to play for the Dallas Cowboys. Yesterday, Adam Schefter of ESPN stated that the former Baylor quarterback was drawing interest from NFL teams, and that two teams had called the Redskins regarding a trade of RG3.

Today, Adam Schefter was asked by fans about the Cowboys and he said that RG3 would be in play for the Dallas Cowboys. So here is my question, with Tony Romo recently announcing he is having surgery on his collarbone, could RG3 be an option?  Schefter says Dallas Cowboys will be in play for RG3, so were they one of the teams that called?

Do you see them as a team that can get right back to where they were in 2014?

Adam Schefter: They’re gonna make some moves here. Let’s just say you sign RG3 during the offseason, you solidify the quarterback position. You decide to go defense; you get a running back in there. Very quickly you think your team is back to what it was, not this past year, but the year before. I think RG3 is gonna be in play for the Dallas Cowboys. So that would be one quarterback option that might make it easier for you to pass on a quarterback this year. But the bottom line is if there’s a quarterback they love, it’s hard to pass up solidifying the next 12 years of your franchise by doing that.