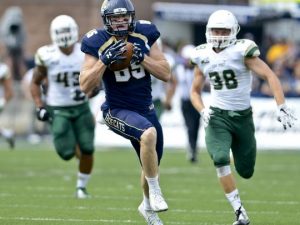 Beau Sandland is one of the top rated small school tight ends of this years draft class. I expect him to have a good performance at the NFL Combine

The NFL Combine has quite a bit of players this year, but I want to list a couple players who I feel will have a very good combine.  We have already read the reports of the big named kids that should have a good week at the Combine, but I am going to go against the grain and pick five small school kids that will likely impress NFL scouts this week.

First off, let’s talk about Beau Sandland. Who is Beau Sandland?  Exactly, he is a small school tight end that was considered the best JUCO tight end in the Nation before he transferred to the University of Miami.  Sandland left Miami for Montana State and boy oh boy is he a player.  I think he will shock many scouts because he can catch and run extremely well. While he needs some work as a blocker, the kid is a very solid pass catcher. I like his chances of rising up the board.

Leshaun Sims – Sims played football at Southern Utah, who has three players at the Combine this year. Sims has Good height, weight and speed for the position. Since coming to Southern Utah, he added 20 pounds to his frame. He ran a verified 4.41 in the spring, and I would not be surprised if he can compete for the fastest forty.

Miles Killebrew – Another Southern Utah player, yep. This kid’s frame for a safety is nasty.  He is a big safety who is extremely physical. He tries to kill the player in front of him. He has a very high motor, and he can catch.  This kid will likely soar up draft boards after the Combine.

DeAndre Houston Carson – The former William and Mary safety is a smart football player. He is a very humble kid with a nose for the ball. He has good speed and good size.  I think he is a good ball player who will have NFL teams falling in love with his knowledge in the film room.

Lastly, I am going to pick Joe Haeg.  Haeg played as a starting tackle for North Dakota State. I like his toughness, and while he will not be a fast guy, he will show good technique.  I think Haeg will fly up boards as well.