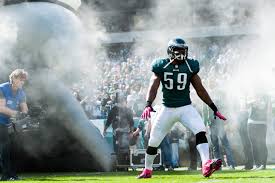 The Eagles released linebacker DeMeco Ryans on Wednesday in a move that opens $3.5 million in salary cap space but takes one of the most respected players off the roster.

The Eagles acquired Ryans from the Houston Texans in a 2012 trade. He played middle linebacker in a 4-3 scheme under then-Eagles coach Andy Reid in 2012, and moved to one of the inside linebacker spots under Kelly in 2013.

A second-round pick by Houston in 2006, Ryans spent six seasons with the Texans. He was selected for the Pro Bowl twice.

Ryans could be a great fit for many teams, so this move should not keep him down very long.