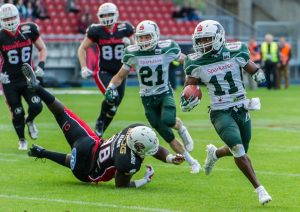 Patrick Donahue did not get the shot that many college players hope for when they finish their senior season.  Donahue thought he would get a shot with an NFL team but that did not happen. The former Southern Oregon wide out from Los Angeles, California is a speedster who dominated finished with a good senior year but it was not enough.

Donahue should be the next player in Germany to get a shot in the NFL. He is an explosive player with outstanding ability to get the ball at its highest point. Has excellent body control. Is the Percy Harvin Mold where he is built like a running back but plays like a receiver. Excels in the return game because he has the ability to make one cut and go. He is extremely powerful, athletic and fast. A Very physical player who excels with the ball in his hands, but is truly amazing with the ball not in his hands. Additionally was a game changer as a returner. Very passionate player who is very driven and has excellent work ethic.