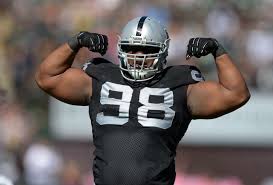 Wilson joined the Lions in 2015 and appeared in eight games last season. He finished the season with eight tackles (six solo) and one sack.