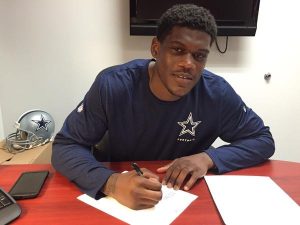 The Dallas Cowboys are losing a good pass rusher for the first four games of the year, according to Ian Rapoport. Randy Gregory has been suspended the first four games for violating the NFL’s substance abuse policy.  He has a past history so I doubt he will be able to get it lowered.

As NFL Media Insider Ian Rapoport pointed out, this suspension means that Gregory has failed a total of four drug tests. The second and third failed tests resulted in fines. The next failed test will result in a half-season suspension. The Cowboys have a lot of questions about their pass rush, and Gregory’s troubles only add to them.

#Cowboys DE Randy Gregory has been suspended for the first 4 games of 2016 for violating @NFL substance abuse policy. He has a history.