Connor Cook says he finished the season with a shoulder injury 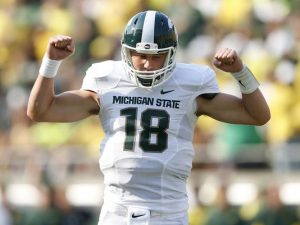 Connor Cook has been dropping down draft boards left and right, and now the former Michigan State quarterback is opening up about his final three games in which he claims he played with a shoulder brace on his throwing arm.  Cook is ready to prove to everyone that he is ready to play now. In an interview with Fox Sports, Cook opened up about his injury as well as his decision to not go to the Senior Bowl.

“It’s been gradually getting better and better each week,” Cook said. He relocated to San Diego about a month ago to train for the draft with George Whitfield and long-time NFL coach Jimmy Raye.

“I took it easy the first week or so (in California) just because that was my first throwing without the brace. I didn’t want to jump out going gangbusters and have any setbacks. I wanted to get a feel for throwing again without the brace because obviously that’s allowing my shoulder to have full range of motion.”

Cook passed on an opportunity to join the Senior Bowl and he said that he and his agent Joel Segal felt it was the best decision to make sure he was 100 percent going forward.

“Obviously, I wasn’t 100 percent playing against Penn State, Iowa and Alabama,” Cook said. “After the season, I talked to my agent Joel Segal and we felt like the best option was to go to California to start training and rehabbing, so that I’d be 100 percent for the Combine and ProDay and that stuff.

“I am a competitor, and any time I get a chance to compete against anyone, I want to take it. So (having to skip the Senior Bowl) did kinda sting, but we just did what my agent thought was the best option.”