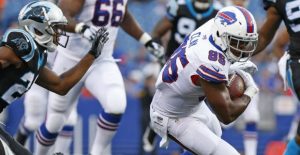 The Buffalo Bills are in the worst cap situation in the NFL right now and it looks like things may be getting a little better for them.  According to the Bills website the team restructured Charles Clay’s contract and they likely will save some big money by doing so.

Bills GM Doug Whaley said this was the week when the club would begin addressing their tight salary cap situation. Step one was creating more cap room by carrying over their $4.4M in unused 2015 cap space to 2016. Step two was the restructuring of tight end Charles Clay contract.

Whaley confirmed the restructuring on the John Murphy Show Thursday at the NFL Combine.

“We just finished a renegotiation on Charles Clay,” said Whaley. “And there are other guys we may want to extend.”