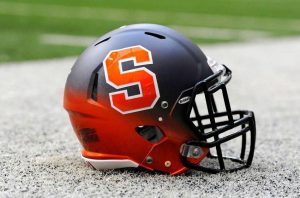 Tomorrow is a big day for defensive end Gabriel “Gabe” Sherrod.  The former Delaware State Hornet will be on his first official visit tomorrow with Syracuse.

Sherrod was a machine last season for the Hornets, racking up 25 tackles for loss including 4 blocked field goals.  Sherrod is a 6’4, 255 pound defensive end that has tons of athletic ability. Sherrod was a 1000 point scorer in basketball as well, which goes to show you how athletic the kid truly is.

The former Perryville High School quarterback would add an amazing pass rush to the Syracuse defense who already has 9 returning starters from last season.

Sherrod will be graduating in May and this move could be monstrous for him.  Last season, Sherrod racked up 64 tackles, 25 were for loss, adding 8 sacks, 2 forced fumbles, and 2 fumble recoveries.  His speed off the edge was the main reason for his 4 blocked field goals, which would come in useful for Dino Babers special teams unit.

Sherrod was in the running for MEAC defensive player of the year, and was a first team all conference player.  Several other teams are very interested in Sherrod, but Syracuse could be a team that helps his draft stock.

Syracuse plays Clemson, Florida State, Louisville and Notre Dame.  Sherrod has the abilities to have a season like Shaquille Riddick had two years ago after transferring to West Virginia from Gardner Webb. Riddick moved up to help his draft status, and he did just that.  Many more FCS players who graduate could be leaning towards transferring up as well.