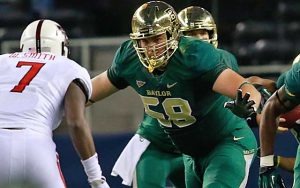 Spencer Drango is a big boy, and should be a first round pick

Pro Football Focus is one of my favorite websites, and the reason we love them so much is the fact that they really break down the film to an extreme level.  They released an article talking about ten stats that NFL scouts would really be impressed with.  This was one from the article that really blew me away.

The four-year starter was tied for first in the country in pass blocking efficiency at 98.9. Besides his production on the field, Drango has all the physical dimensions needed to play left tackle in the NFL. The question is whether or not he’ll be able to transition from the spread offense he’s played in his whole college career. Drango will need to show he has the athleticism to play a tackle position at next level to avoid being tagged as an NFL offensive guard.

Drango should be considered a first round guy, but this stat is impressive. Especially considering the edge rushers that Baylor faced this year.  I am impressed with this stat because so many teams need an offensive tackle for the future.