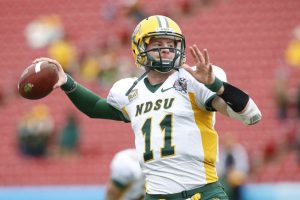 Carson Wentz and Noah Spence could be selected in the first round of the 2016 NFL Draft. Last time it happened was 2008

The last time two FCS players were drafted in the first round was 2008 when the Arizona Cardinals drafted Dominique Rodgers-Cromartie with the 11th pick and Joe Flacco was drafted by the Ravens with the 18th pick out of Delaware.

This year both Carson Wentz the North Dakota State quarterback and Noah Spence the defensive end from Eastern Kentucky could be selected in the first round.  Both players are flying up draft boards right and and their draft stock will determine largely on their performance this week at the NFL Scouting Combine.

Wentz has been projected to the Browns as the second pick in the NFL draft on some Mock Drafts, while Spence has been taken in the top 10 in some.

While both are considered small schoolers they pack a punch.  Wentz is a competitor with a winning record, and 5 straight National Championships.  Wentz came back from a wrist surgery on his throwing hand to win the National Championship this year against Jacksonville State.

Spence was a former Ohio State pass rusher who ran into trouble with the Buckeyes. Many thought he would leave early last year, but he stayed at Eastern Kentucky and was dominate. After an amazing week at the Senior Bowl, his stock is flying. His character concerns will scare some scouts, but he has been amazing since his time at EKU.

Many FCS players will be drafted this year, but to have 2 in the first round would be amazing.

Nearly 140 NFL players on active rosters hail from FCS schools. Of those, more than 50 start for their respective NFL teams. Last year, 17 players from the FCS were drafted into the NFL